I attended MozCon 2017 last month where it’s always a blast to reconnect with old colleagues and make new friends.  That being said, this isn’t going to be your typical feel good post or conference recap.  Instead, it’s going to be an observation about conference diversity, specifically MozCon.

I attended my first MozCon back in 2013 with SEOgadget (now BuiltVisible) where it was also Moz’s first time hosting the conference at the Washington State Convention Center in Seattle.  I don’t recall the exact numbers but I’d venture a guess it was anywhere between 800-1K attendees.  It didn’t feel too large where you’d get lost in the crowd but it was intimate enough.

Intimate to the point where you would be acutely aware of the fact that you’re a minority - not something I was used to as a San Francisco native.  In fact, the only other Asian I saw was Stephanie Chang who was working for Distilled at the time.  Why do I bring this up?  Because in 2013, the SEO industry was just starting to go “mainstream” so the demographic makeup naturally skewed toward the White Male, making it easier to remember other Asians.

Fast forward to MozCon 2017: it felt like I never even left San Francisco due to the diverse range of attendees from all walks of life.  We (Asians) are obviously still a minority but it’s a significant enough change where I no longer think to myself, “I’m the only Asian person here.”

Which leads us to my original question for this blog post: given Rand’s stance, and Moz by association, on intentional diversity with a more diversified mix of conference participants, how come that wasn’t represented in the MozCon 2017 speaker lineup?  Is it just me or am I being overly sensitive?  I’m sure they’re working on it, right?

Side note: I’ve been procrastinating on this for quite some time but due to recent political events and increased exposure on the subject (video example below) it has galvanized me to express some of my thoughts which, by the way, do not represent the opinion’s of my past, present or future employers.

To get my answer, I wanted to remain as objective as possible and rule out any conscious or unconscious bias.  I’ll be the first to admit it’s not perfect and definitely prone to sampling errors but we’ll leave that discussion on the table for another day.  Here’s my collection methodology: 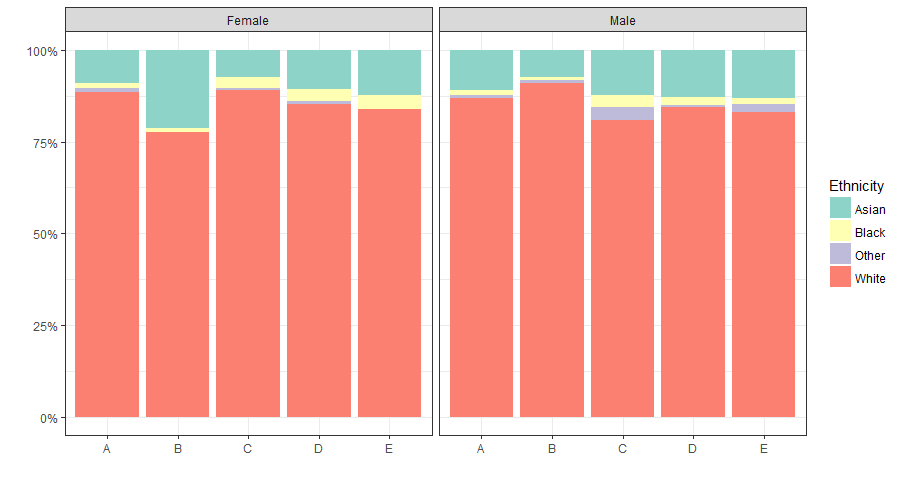 So, with all that finally out of the way how is Moz doing?

The 2017 MozCon speaker lineup had an over representation of females at 52%, as opposed to 42% of the attendee population. 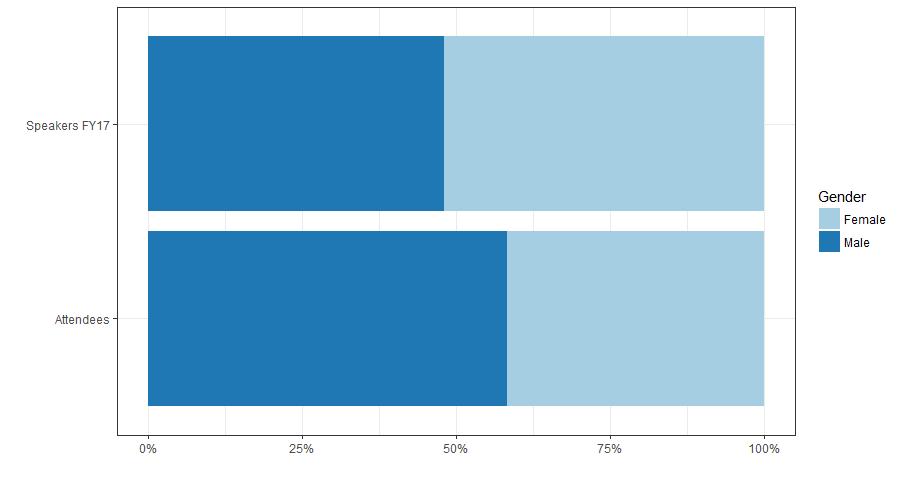 However, the distribution of speakers by gender is nearly on par with 2016 Census data where females make up 51% of the US population (dotted red line). 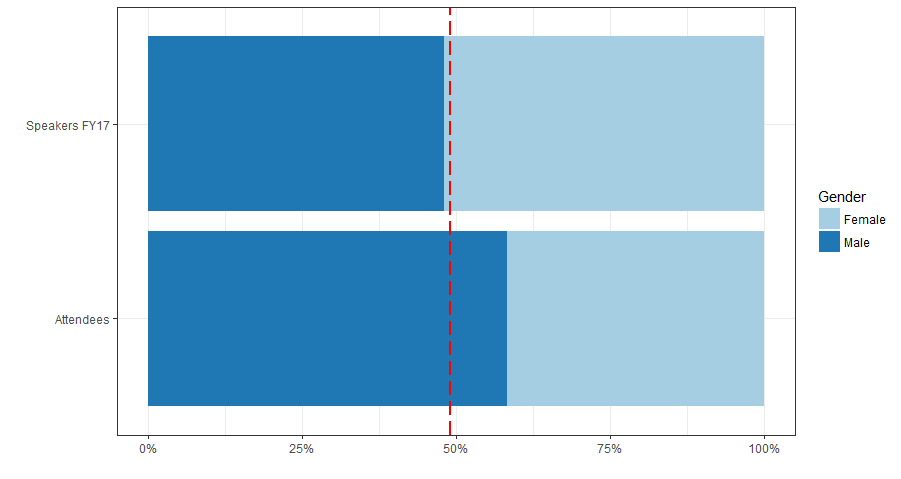 In fact, it’s quite apparent that Moz has made a concerted effort over the years to increase the gender diversity of their speaker lineup. 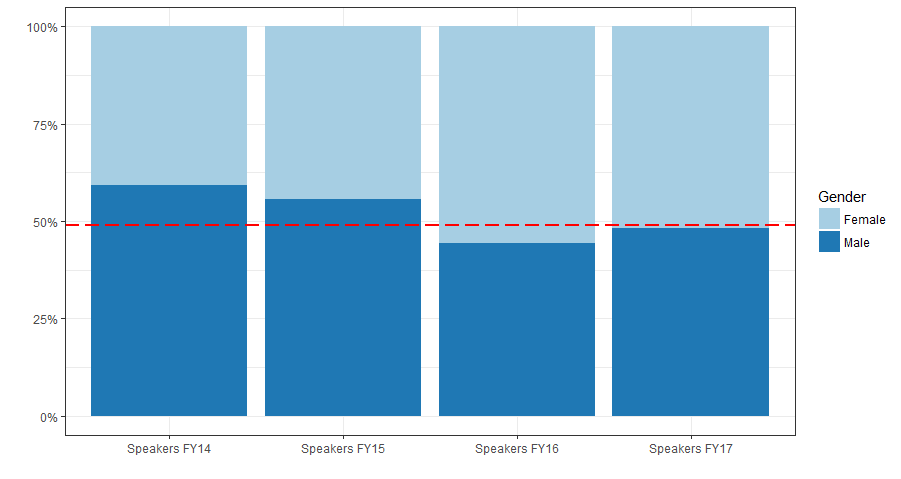 I think it’s safe to say Moz has no problems there and I applaud them for achieving that threshold like they said they would.

But what happens if we add another dimension to our analysis?  In this case: Ethnicity (chart below).  As expected, 85% of conference goers are predominantly White, followed by 11% Asian and 2% Black.  In my opinion, it’s not _too _bad as the SEO industry grows and continues to gain widespread acceptance as a non-shady discipline. 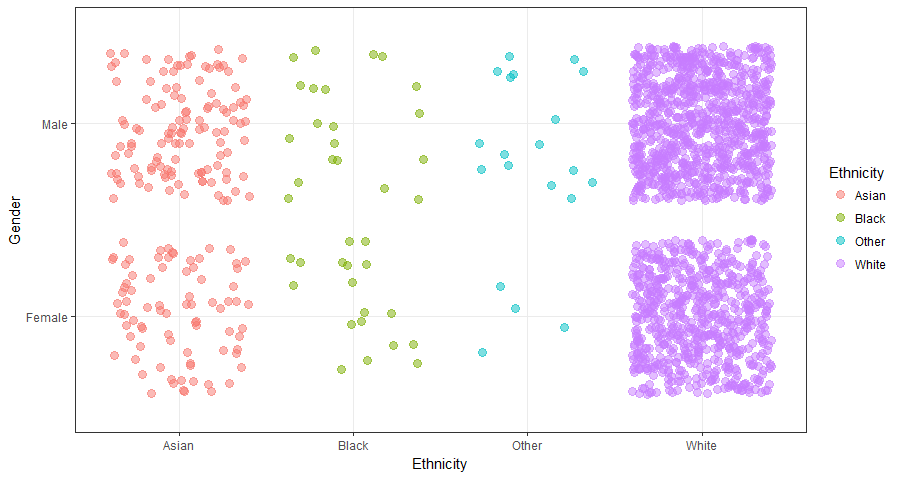 For comparison with the 2016 US Census, 78% of the population is White, followed by 14% Black and 6% Asian.  It’s unclear why there is such a large discrepancy between sample attendee population and Census population but I encourage anyone interested to conduct further research, although I suspect this may be a larger socioeconomic question.

Now what if we take that same plot and apply it to the MozCon speakers lineup since 2014? 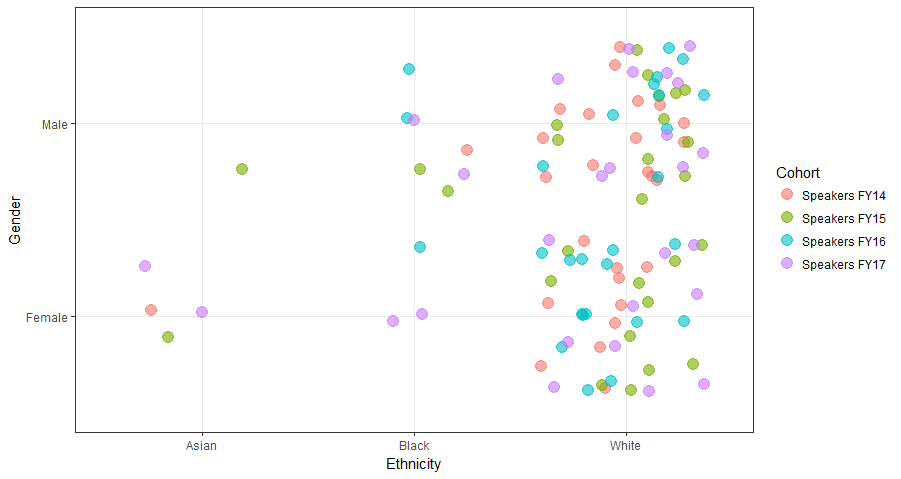 It would appear there is a gross under representation of Asians when compared to our sample attendee population and more specifically, Asian Males.

Additionally, Asian Males represented 59% of the Asian sample population who attended MozCon 2017 (+9% higher than US population) with only a single Asian Male speaker in the last 4 years.  Compared with the White and Black population, the 2017 Speaker-to-Attendee distribution is almost a perfect fit against the 2016 US Census. 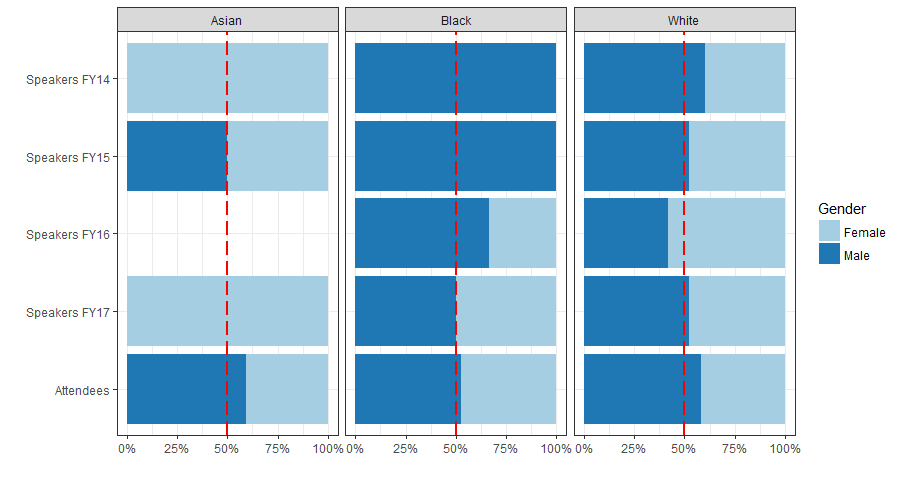 Let’s be clear about one thing: this under representation is not Moz’s fault.

I personally think it’s mostly a pipeline issue (aka chicken and egg) as this is something Rand alluded to in his talk about intentional diversity: how do you find Asian SEO’s to speak at conferences if they aren’t presenting in the first place?  And if you do find one do they even want to speak?  Are they qualified for a speaker spot?  You don’t want to jeopardize quality but at the same time you want to select based on merit and not physical attributes.  Last but not least, Moz may be a vocal champion of diversity but are they looking hard enough?

For example, Eric Wu from BloomNation is the first to come to mind.  He has spoken at a number of conferences and one of the few I trust in this industry (even though he no longer claims to be an SEO).  We have been in the same philosophical camp for a number of years where we argue that SEO is NOT a marketing discipline but a function of product management.  When was the last time you heard that perspective at a conference?

MozCon is still one of the few SEO conferences worth attending with top notch production, although IMO they continue to cater to beginner/intermediate content marketing types.  They’re doing a great job addressing diversity issues and would love to see them continue to put their money where their mouth is.